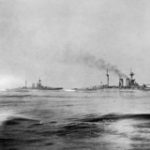 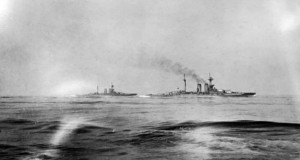 On Tuesday 31 May, to mark the centenary of the Battle of Jutland, an event entitled ‘Commemoration of the Irish Sailor’ was held in  Belfast. The event commemorated Irish sailors who served and find in the First World War, and took place at Alexandra Dock with HMS Caroline as the backdrop, during which the cruiser was officially opened to the public; it is the last surviving vessel to have seen service at the Battle of Jutland, the most significant naval battle of the First World War. The Battle of Jutland involved 100,000 men and lasted over 36 hours, during which time Britain lost 14 ships and 6,000 sailors and Germany lost 11 ships and 2,500 sailors. Over 350 of the men lost were from Ireland. While technically a German victory, in terms of vessels lost and casualties, it rived decisive in securing the Royal Navy’s dominance in the North Sea, as German naval forces never again attempted an operation on the same scale.

The Royal Navy and Irish Naval Service participated to mark all those from the island of Ireland who served at sea and wreaths will be laid on behalf of both services; the Irish naval vessel LÉ Ciara and the British naval vessel HMS Ramsey weree in port for the preceding weekend and open to the public as part of Belfast’s Maritime Festival. Senior political and military representatives from the UK and Ireland were in attendance, alongside a German naval admiral. The ports of Ireland, Irish Lights and maritime emergency services were all  represented, and the event will also be attended by the families of those who served, and Belfast City Council will host all attendees for a civic lunch on completion of the ceremony.

Karen O’Rawe, chair of History Hub Ulster said: ‘The Commemoration to the Irish Sailor is a significant all-island event, the contemporary relevance of which should not be underestimated. The event is a timely reminder that 1916 is not all about the Easter Rising and the battles of the Somme. The sacrifice of so many men from these shores who fought at sea, the maritime war and the impact of it on our island tends to be overlooked. The Centenary of the Battle of Jutland and the launch of HMS Caroline is the perfect context to be officially recognising the contribution of all those in maritime roles on the island of Ireland in the 1914-18 period.’

Learn more about the event from History Hub Ulster.

Post Views: 45
Posted in 2016 events, Events in May 2016, Ireland and the World, Past, UK/United Kingdom Centenaries, Ulster, World War One