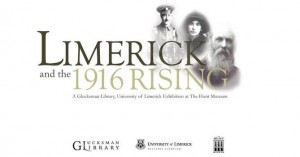 On Thursday 31 March the Hunt Museum, Limerick hosted a symposium on ‘Limerick and 1916’, to accompany the ‘Limerick and the 1916 Rising’ exhibition at the museum. The exhibition focuses on the Daly Family collection held at Glucksman library, University of Limerick.  The symposium contextualised the exhibition within the wider history of 1916 while highlighting Limerick connections to this pivotal event in Irish history.  Speakers included Helen Litton , Jeff Leddin , Angus Mitchell,  Tom Toomey  and Ruan O’Donnell. The conference was followed by the official opening of the ‘Limerick and the 1916 Rising’ exhibition at 6pm.