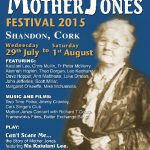 From History Ireland: Mother Jones, ‘the most dangerous woman in America’.

Find out more or adjust your settings.