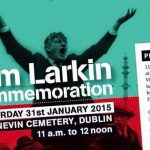 On Saturday 31 January 2015 a commemoration took place in Glasnevin Cemetery, Dublin, to mark the anniversary of the death of James Larkin on 30 November 1947. As the leader of the ITGWU Larkin was one of the key figures in the 1913 Lockout. At 11am SIPTU vice-president Patricia King laid a wreath on behalf of the Larkin family. This was followed by a lament by the Fintan Lalor Pipe Band, and an oration by SIPTU general president Jack O’Connor.

Read a short biography of James Larkin from UCC Multitext, and explore the National Library of Ireland’s online exhibit on Larkin and the Irish Citizen Army.