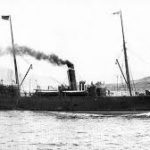 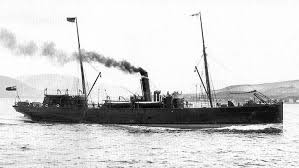 In December 1917, two merchant ships, the SS Hare and the SS Adela, were torpedoed by German U-boats and were lost in the Irish sea during the First World War. Thirty-six lives were lost on 14 December and 27 December 1917, which had a huge impact on the Dublin Docklands community, where many of these victims resided and worked. Several crew members survived. One hundred years later the Docklands communities with the support of Dublin City Council, Dublin Port Company and others took the initiative to remember and commemorate these two ships and all who sailed with them on their final journeys.

This commemorative event took place on Saturday 30 September 2017, assembling from 12.30 p.m. for a 1.00 p.m. start at the at the Dublin City Council’s Offices (the former DDAA Offices) on Custom House Quay near the Sean O’Casey Bridge (North Side) and opposite ‘The CHQ Building’. A commemorative plaque was unveiled here to the SS Hare while also remembering the role the ship played in 1913 with the bringing of much needed food supplies to the families of the striking workers during the 1913 Lockout’ Afterwards,  a second commemorative plaque was unveiled to the SS Adela at the Campshire Buildings close to the Ship’s original berth on Sir John Rogerson’s Quay. These commemorative plaque unveilings were officiated by Ardmhéara and Honorary Admiral of Dublin Port, Councillor Mícheál Mac Donncha (The Lord Mayor of Dublin City).

The event then adjourned to the nearby Clayton Hotel, off Cardiff Lane (around the corner from Sir John Rogerson’s Quay) for the launch of a once off commemorative booklet and exhibition panels to mark this very historic and special occasion. This was officiated by Ms. Lucy McCaffrey, the Chairperson of Dublin Port Company.

All were welcome to this important commemoration, as the citizens of Dublin pay a respectful tribute to the memory of those Mercantile Marine members who showed such bravery and determination and who put their lives at risk bringing much needed supplies back and forth across the Irish Sea to sustain this City in a time of conflict and who became innocent victims of war. Photography courtesy of Patrick Hugh Lynch.

From Near FM: David Cotter and Hilary Wallner discuss the sinking of the Hare and the Adela.

Post Views: 66
Posted in 2017 events, Dublin, Dublin Lockout, Events in October 2017, Ireland and the World, Other Podcasts, Past, World War One