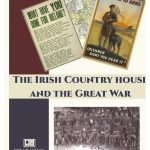 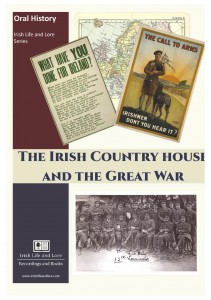 At 3pm on Wednesday 30 July the latest Irish Life and Lore oral history collection, entitled The Irish Country House and the Great War, was launched in the National Library of Ireland, Dublin, by Minister Aodán Ó Riordáin TD. The launch was also addressed by the British Ambassador, HE Dominick Chilcott, and Mr Kevin Myers. The oral history collection is accompanied by an illustrated catalogue.

Members of 52 families were recorded for the project. According to Maurice O’Keeffe of Irish Life and Lore, ‘Much of the information recorded in this oral history collection has been brought into the public arena for the first time, and will now be available to historians and researchers into the future.  We are very grateful to the people recorded for their great co-operation and huge integrity during the sometimes difficult and emotional process of compiling the collection’.

The recordings touch upon a diverse range of subjects,  such as the reasons for involvement in World War One; family histories; insights into the personalities of those who fought; traditions of military service; the regiments that they joined; stories from the trenches and letters written from the front; the important role of women who served in the war; military honours awarded; memorials dedicated to the war dead; the consequences on families of the death of an heir or heirs; and the lives lived after the war by those who survived or who had been bereaved. The physical and psychological toll inflicted upon both survivors and those bereaved in the war is another key theme of the collection.

The project was funded by Fexco Financial Services of Killorglin, Co. Kerry, and is endorsed by the Department of Arts Heritage and the Gaeltacht.

Learn more about the Irish Life and Lore project.