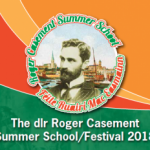 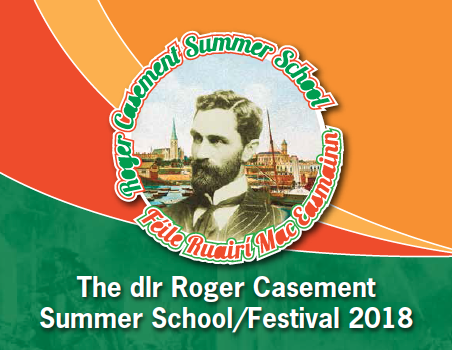 Between Thursday 30 August and Saturday 1 September 2018 dlr Lexicon Library hosted the second dlr Roger Casement Summer School/Festival, with the support of Dun Laoghaire Rathdown County Council. Roger Casement (1864-1916) was born in Sandycove, Co. Dublin, the youngest child of four of an Antrim family.  He worked in various employments in Africa before starting his diplomatic career in 1895. In 1900 he was appointed British Consul to the Congo Free State (now the Democratic Republic of Congo). The Congo Free State was the personal territory of King Leopold II of Belgium. In 1903 criticism of Leopold’s rubber regime resulted in Casement being instructed to investigate allegations of Belgian atrocities. He continued his diplomatic career as Consul-General in Brazil in 1906. In 1910 he was chosen to investigate allegations of misconduct the Peruvian Amazon Company (PAC) in the Putumayo region of Peru (now in Colombia). He was an excellent observer and investigator, and grew increasingly appalled with the  brutal exploitation of indigenous peoples in the production of rubber. His Congo and Putumayo reports brought global attention to these atrocities. Over time he noticed similarities between the destruction of indigenous culture by colonisation and the Irish situation. He was awarded a knighthood in 1911 in recognition of his work, but returning to Ireland he gravitated towards Irish nationalism Ireland, as a member of the Gaelic League, Casement would put his Irish nationalist sentiments into action by helping to form the Irish Volunteers. He raised money, established overseas connections, brought in arms, and assisted in the writing of their manifesto. When he was caught by British forces at Banna Strand following a botched gun-running operation, the Rising was a mere three days away. Imprisoned in London, Casement was tried and convicted of treason, and was executed on 3 August 1916. The summer school saw a wide range of speakers, including Martina Devlin, Nollaig Mac Congail, and Angus Mitchell, explore Casement’s life and legacy; download the full programme with contact details and explore the special edition of the University of Notre Dame’s journal Breac on Roger Casement.
Post Views: 97
Posted in Artistic and Cultural, Dublin, Easter Rising, Events in August 2018, Ireland and the World, Irish Volunteers, Local Authority Events, Past, World War One and tagged Dun Laoghaire, Roger Casement