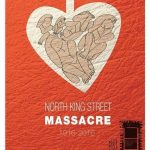 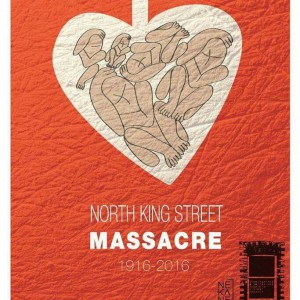 On Saturday 30 April the Stoneybatter and Smithfield People’s History Project organised a parade and plaque unveiling to commemorate sixteen unarmed civilian men and boys killed by the South Staffordshire Regiment during house-t0-house searches on North King Street, Dublin 7, in the final days of the 1916 Rising.

The parade assembled at 2.00pm at Kavanagh’s Pub on Aughrim Street and departed at 2.30pm to march the short distance to North King Street, where a plaque with the names of all of the victims was unveiled.

Liz Gillis was the main speaker and there was also music and readings. Relatives of those killed were also in attendance. The event was followed by a reception in The Cobblestone, North King Street.

From South Dublin Libraries: read a collection of statements on the killings in North King Street.