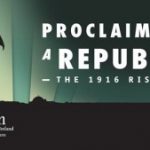 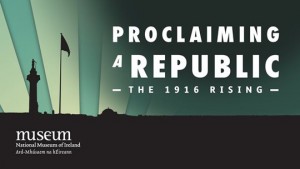 On Thursday 3 March the National Museum of Ireland (Decorative Arts and History), Collins Barracks, Dublin 7,  opened its new 1916 exhibition to the public. Entitled Proclaiming a republic: the 1916 Rising, this new exhibition explores the ideas, movements and personalities of early 20th century Ireland, the dramatic events of Easter Week, the impact it had on the city and its citizens, and the Irish nation as a whole. These themes will be explored, in both Irish and international contexts, through the stories of civilians, rebels, and the leaders of the Rising.

The Easter Week Collection of the National Museum of Ireland holds over 15,000 objects, including many iconic objects such as the 1916 Proclamation and the flag of the Irish Republic, as well as unique and emotive personal objects, many of which will be on display for the first time.

Admission is free; the exhibition is open to the public Tuesday-Saturday, 10am-5pm, and on Sunday from 2pm-5pm.

Learn more about Proclaiming a Republic.