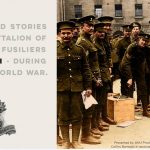 Between 2 February and 30 April 2015 the National Museum of Ireland, Decorative Arts and History, Collins Barracks, hosted Pals: the Irish at Gallipoli. Award-winning theatrical producers ANU Productions present an immersive World War One experience, based on the events surrounding the campaign at Gallipoli in Turkey and inspired by the previously untold stories of the 7th Battalion of the Royal Dublin Fusiliers – and the everyday lives of Irish people who were affected by the Great War. This newly commissioned interactive theatrical piece was a partnership between ANU Productions, the National Museum of Ireland and the Department of Arts, Heritage and Gaeltacht in association with the National Archives of Ireland. The project is being directly funded by the Department of Arts, Heritage and Gaeltacht.

Pals: the Irish at Gallipoli was performed at the National Museum of Ireland, Collins Barracks from Monday 2 February to Thursday 30 April.

Click here for further details on Pals: the Irish at Gallipoli.

From History Ireland: The Royal Dublin Fusiliers in the Great War and Dublin and the First World War.

Post Views: 102
Posted in 2015 events, Artistic and Cultural, Dublin, Events in February 2015, Events in March 2015, Ireland and the World, National Museum, Past, World War One