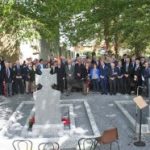 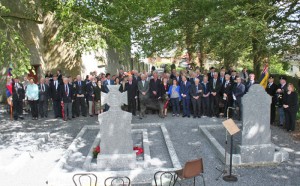 On Monday 3 August 2015 a commemorative ceremony was held in Castletown Geoghegan, County Westmeath to remember the awarding of a Victoria Cross to Captain George Arthur Boyd Rochfort. The citation was originally awarded for conspicuous bravery on the Western Front, when on 3 August 1915 Boyd-Rochefort picked up a German trench mortar bomb that had landed in a section of trench: he threw it back over the parapet of the trench, where it exploded without causing any harm.

The event was organised by Patrick and Cathy Clarke. Around 70 people attended the ceremony including relatives of Major Boyd-Rochfort. The Reverend Isaac Delamere from Tullamore delivered the prayer of remembrance. Wreaths were laid at the grave by Major General David O’Morchoe, President of the Royal British Legion (Republic of Ireland) by Lieutenant Colonel Andrew Foster of the Scots Guards and by Ian Robinson, Chairman of Irish Guards Association, Republic of Ireland. The standard of the Royal British Legion Rep of Ireland was carried by Ciaran Crone; and the Irish Guards Association standard was carried by Brendan O’Neill. Lieutenant Colonel Ken Martin, Chairman of the RBL oversaw the wreath laying and introduced the prayer of remembrance.  After the ceremony guests were invited to a reception at Middletown Park House, formerly the home of Captain Boyd-Rochfort.

Read the text of the speech delivered by Cathy Clarke at the commemoration.