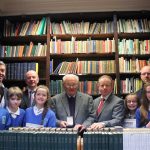 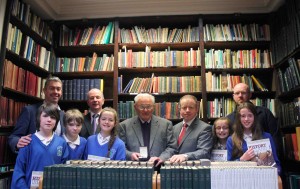 On Thursday 29 May the Minister for Training and Skills, Mr Ciarán Cannon TD, announced that Scoil Choilmcille in Termon, Co. Donegal, was the overall winner of the ‘Decade of Centenaries’ All-Island schools history competition.

The schools history competition is a jointly funded initiative of the Department of Education and Skills and the Department of Education in Northern Ireland.  The competition invited primary and post-primary students from schools across Ireland to examine the impact of a particular event or person in their locality in the course of the revolutionary decade of 1912–1922. Out of the 182 projects received, twelve winners were selected by a three person panel chaired by Professor Mary Daly of University College, Dublin., the current President of the Royal Irish Academy. The ceremony took place in Academy House in Dawson Street, Dublin 2.

The winning project by Scoil Choilmcille, a primary school, was entitled ‘It’s a long way to Tipperary – The Mystery of the Medal’. The project focused on a First World War medal that was discovered in Donegal, but traced back by the pupils concerned to the Hynes family in Tipperary. The medal originally belonged to Philip Hynes who died while serving with the British army during the First World War. The medal was brought to Donegal by the dead soldier’s nephew, who was a member of the IRA stationed in Donegal during the Civil War. The medal was lost in Donegal and remained undiscovered for 90 years until it was found by a local man, Benny Gallagher, while digging his garden.  Philip Hynes grandnephew, also Philip Hynes, was present at the ceremony to accept the return of the medal on behalf of the Hynes’ family. He was ‘delighted’ to do so, he said. 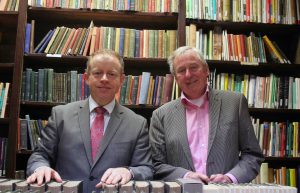 When awarding the prizes, Minister Cannon congratulated the pupils of Scoil Choilmcille and their teacher, Christy Gillespie, for their endeavours in bringing such an eventful story to life. ‘This is a fantastic story which highlights the impact of the “Decade of Centenaries” on one family’, remarked Minister Cannon. The “Mystery of the Medal” would have remained untold were it not for the excellent research and detective work undertaken by the primary school children in Scoil Choilmcille and their teacher. It a considerable achievement for a primary school to be the overall winner in a competition that it is open to both primary and post primary levels’. As well as the overall winning project there were four provincial winners and seven other winners.

The provincial winners came from sixth class in Scoil Mhuire, Moycullen Co. Galway; fifth year pupils in Meánscoil Iognáid Rís in Naas, Co. Kildare; pupils in fifth and sixth class in Kilrossanty National School in Co. Waterford, and Year 10M pupils from Drumragh Integrated College in Omagh, Co. Tyrone.  Minister Cannon praised the efforts of all of the winners: ‘Your work reflects very positively on yourselves as individuals and classes. It also reflects very well on your teachers and school communities who have clearly provided able support and encouragement to your efforts. I hope this competition has stimulated your passion for history that will stay with you forever’. Minister Cannon also thanked everyone who had submitted a project to the competition for their efforts.

Prizes were awarded to the winners and runners-up. The overall winning entry received book tokens in the value of €1,250, along with a year’s subscription to History Ireland. An edited version of the overall winning project will also be considered for publication in History Ireland. All twelve of the winning projects will be published on-line on the Scoilnet website in due course.