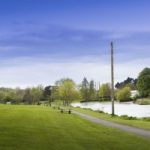 On Thursday 30 June 2016 Voices of memory: a riverside sound art installation by Christina Kubisch, opend at the Irish National War Memorial Gardens , Islandbridge, Dublin 8, to mark the centenary of the beginning of the Battle of the Somme. Presented in association with the Goethe-Institut, this is a contemporary remembrance of the more than 49,000 names of the dead of the war published in Ireland’s Memorial Records 1914-1918.  Almost the entire list of these names was read by volunteers of different ages and accents from across Ireland. The sound installation is based on the flow of these male and female voices playing over the banks of the river. The names are heard in alphabetical order; along with small breaks of silence, the composition includes sounds of underwater recordings made in the River Liffey; the rhythm of the passing rowing boats, the hidden natural world of small insects and animals, and the flow of water itself.

The installation is open to the public in the Irish National War Memorial Gardens until 30 September 2016.

Learn more about Voices of memory.

Post Views: 200
Posted in 2016 events, Artistic and Cultural, Events in July 2016, Exhibitions, Ireland and the World, Past, Somme, World War One