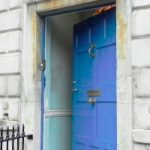 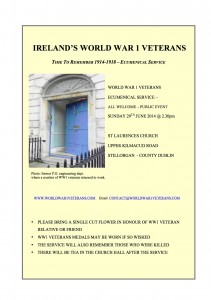 An ecumenical service of remembrance took place in St. Laurence’s Church, Upper Kilmacud Road,  Stillorgan, County Dublin, on Sunday 29 June 2014, in memory of veterans of the First World War from Ireland. Members of the public were encouraged to to bring a single stem flower of their choice to be placed on the altar in the course of the service, which was in memory of Irish soldiers who were killed or listed as missing during the war. Music was provided by St. George’s Brass Band. The service arose from a larger project to collate a database of Irish veterans of the First World War to have served in all combatant armies.

For further details of the veterans project and to access its current database of veterans, click here.

Post Views: 75
Posted in 2014 events, Dublin, Ireland and the World, Past, World War One