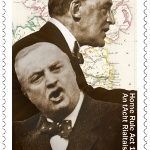 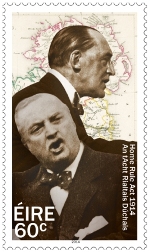 On 28 May An Post released the latest in a series of commemorative stamps marking the ‘Decade of Centenaries’. The stamp marks the centenary of the signing of the Government of Ireland Act 1914, better known as the Home Rule Act. The 60c stamp, designed by Ger Garland, features John Redmond, leader of the Irish Parliamentary Party, and unionist leader Sir Edward Carson. An accompanying first day cover features the stamp and a reproduction of a satirical cartoon of the time. The stamp features Carson and Redmond against a map of Ireland. Both are available at irishstamps.ie, main post offices or the Irish Stamp shop in Dublin’s GPO.

Redmond led the Irish Parliamentary Party from 1900 to 1918 while Carson was the leader of the Unionist Alliance and Ulster Unionist Party from 1910 until 1921.

To read a short biography of John Redmond, from UCC Multitext, click here.

To read a short biography of Edward Carson, from UCC Multitext, click here.