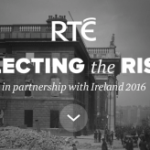 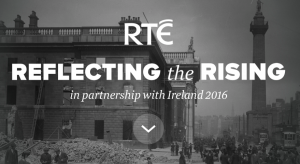 On Easter Monday, 28 March 2016, Dublin centre centre hosted RTÉ 1916: Reflecting the Rising, a large-scale multi-location public event featuring hundreds of talks, walking tours, music, dance, street art, street theatre, and moments of reflection and celebration. The event ran from 11am to 6pm. Hundreds of free events with a historical element are planned over eight city centre public zones which will be open to all. Featuring major television drama, groundbreaking documentary, curated on-street events and a slate of young people’s programmes. Reflecting the Rising considered the event itself, as well as the broader cultural, political and historical complexities of the Rising, and its impact on the decades and century that followed.

Announcing  Reflecting the Rising, RTÉ Director-General Noel Curran said that ‘1916 is a year of huge emotional and political significance in Irish history. In our approach to covering and commemorating the centenary of 1916, RTÉ is embracing all of its complexity of by planning a range of diverse programming and events – across television, radio, mobile and beyond – where audiences can understand, debate, commemorate, and celebrate. Our coverage will include the many planned events that will commemorate and celebrate, but it is not limited to the Rising itself – it will also look back at the last hundred years in Ireland and look to the decades ahead of us now. It will embrace music, the arts and street events, as well as historical programming. The scale and range of our programming is suitably wide-ranging and ambitious. I believe that in this special commemorative year, this is RTÉ’s role and responsibility. We hope our audiences will join us for a unique series of programmes and events that chart, explain, critique and celebrate a century of Irish life’.

Reflecting the Rising was presented in partnership with Ireland 2016, and created with the cooperation of the National Transport Authority, Dublin City Council and the Department of Arts, Heritage and the Gaeltacht.

Explore the full programme for RTÉ 1916: Reflecting the Rising.