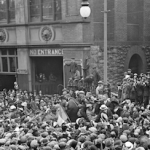 On Saturday 28 January 2017 Dublin City University hosted a public symposium entitled ‘1917 aftermath of rebellion’, exploring Irish life in the months following the Easter Rising of 1916. It explained how the 1916 Rising became the catalyst for the creation of an independent Irish state,  assessed aspects of life in Ireland after the Rising and considered some of the fundamental changes that took place during 1917. Speakers will include Conor Mulvagh (UCD), Michael Laffan (UCD), and Ruth McManus (DCU).

Listen back to a History Ireland ‘Hedge School’ on Ireland after the Rising, 1916-18.