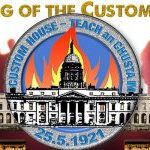 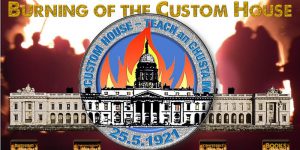 On Saturday 27 May 2017 the Custom House, Dublin 1, hosted a one-day conference on the burning of the Custom House on 25 May 1921, following a major attack by the Dublin Brigade of the IRA. The attack on the building, which houses the Department of Local Government, was intended to be a substantial show of strength, and a departure from the guerrilla tactics usually favoured by the IRA during the War of Independence; given the capture of the large numbers of Volunteers in the aftermath mean that is usually considered to be a military failure.

Organised by Liz Gillis and Mícheál Ó Doibhlín with support from Office of Public Works however, this conference discussed issues including the use of fire as a weapon during the War of Independence, the attack itself and whether or not it actually was a military failure, and the role of the Dublin Fire Brigade, a military analysis of the attack, records relating to the Custom House attack and personnel in the Military Archives and what it was like to be inside the buiding during the attack. A book on the attack by Liz Gillis was launched at the conference.

Post Views: 132
Posted in 2017 events, Dublin, Events in May 2017, Irish Volunteers, Past and tagged Custom House, IRA, War of Independence