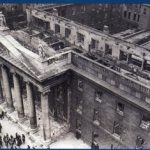 On Friday 27 March the Dublin Institute of Technology (DIT) Conservatory of Music and Drama presented a selection of rehearsed readings, songs and poetry inspired by the insurrection in Dublin: A terrible beauty – echoes of Easter 1916. The performance took place at 1pm and 7pm at the DIT Conservatory of Music and Drama, 163-167 Rathmines Road Lower, Dublin 6, on 27 March. Speaking prior to the event, director Mary Moynihan, Artistic Director and Theatre Consultant for Smashing Times Theatre Company and a full-time lecturer at the Conservatory said: ‘A terrible beauty features readings from a range of sources with a special focus on remembering and acknowledging the role that women played in 1916 particularly as revolutionaries and insurgents fighting on an equal basis with their male counterparts’. A terrible beauty was developed as a collaboration between the writer Peter Sheridan, director and writer Mary Moynihan, and researcher Lisa Walsh, with  readings by first year drama students from the BA in Drama (Performance) programme at DIT Conservatory of Music and Drama. As well as readings from works such as Sean O’Casey’s The Plough and the Stars by Sean O’Casey, the readings also feature a number of short scenes and monologues created by the students themselves. A terrible beauty was intended to explore the experience of the women of 1916 and the actions of those at the forefront of the rising as well as bringing to life some of the most prominent figures of the day including Patrick Pearse, Joseph Plunkett,  Hanna Sheehy Skeffington, Grace Gifford, W.B Yeats and Helena Moloney.

From the Ireland Institute: read Declan Kiberd on the Easter Rising in poetry and drama.