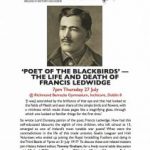 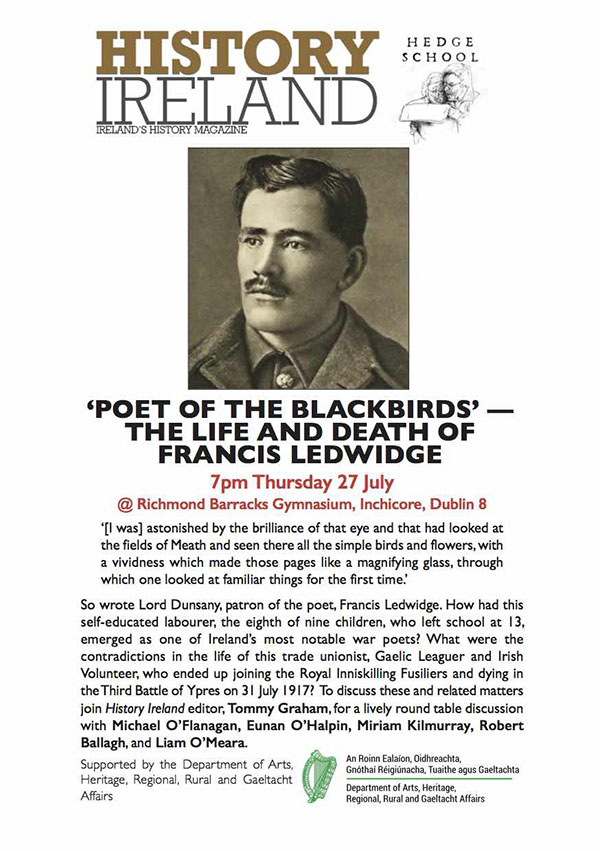 On Thursday 27 July a History Ireland Hedge School debate took place in Richmond Barracks, Inchicore, Dublin 8, entitled ‘”Poet of the the blackbirds”: the life and death of Francis Ledwidge’. Ledwidge (1887-1917) was from near Slane, Co. Meath; he was the eighth of nine children who left school at 13 to work as a labourer, and who emerged as one of Ireland’s most notable ‘war poets’. To explore the contradictions in the life of this trade unionist, Gaelic Leaguer and Irish Volunteer, who ended up joining the Royal Enniskilling Fusiliers and was killed at the Third Battle of Ypres on 31 July 1917, a round table discussion was hosted by History Ireland editor, Tommy Graham, with panelists Michael O’Flanagan, Eunan O’Halpin, Miriam O’Gara-Kilmurray, and Liam O’Meara. Three of Ledwidge’s poems set to music were performed by mezzo soprano Miriam O’Gara-Kilmurry, accompanied by Irish composer and pianist Michael Holohan and Rebecca Draisey-Collishaw on the cor anglais (English Horn). This event was supported by the Department of Arts, Heritage, Regional, Rural and Gaeltacht Affairs.

Stream or download a full recording of the Hedge School here.