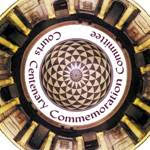 On Wednesday 27 July 2016 the Courts Centenary Commemoration Committee hosted an event on to remember those members of the Irish legal profession who died during the Battle of the Somme in 1916. It  commenced at 5pm in the Supreme Court, Four Courts, Dublin 7, and  included talks by representatives of the Bar of Northern Ireland, the Bar of Ireland, and the Law Society of Ireland followed by a reception in The Distillery Building of the Bar of Ireland, Church Street, Dublin 7.

Explore Century Ireland’s online exhibition on the Battle of the Somme.