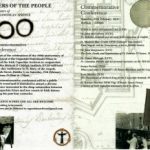 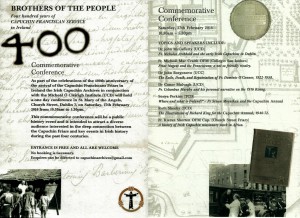 On 27 February 2016, to mark the 400th anniversary of the Capuchin Franciscan Service in Ireland, Church St Friary, Dublin 7 hosted free conference on different aspects of the contribution of the Irish Capuchins to the history and culture of Ireland. It took place in Church St. Friary on Saturday February 27 from 10:30am – 5:30 pm. Speakers included John Borgonovo (UCC), Conor MUlavagh (UCD), John McCafferty (UCD), and Fr. Mícheál Mac Craith OFM.

The conference includedtalks on the central role the friars played in the 1916 Rising, War of Independence and the Celtic Cultural Revival, as well as fascinating glances into the life of the friars during the earlier years of the Capuchin presence and mission to Ireland.