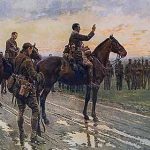 ‘The Last General Absolution of the Munsters at Rue du Bois’, by Fortunino Matania

On Monday 27 April 2015 the Roman Catholic Archbishop of Dublin, Diarmaid Martin, launched the digitised edition of the papers of Fr. Francis Gleeson at at a reception in Holy Cross Diocesan Centre, Dublin 3. The event was attended by members of Fr Gleeson’s family, the British Ambassador to Ireland, Mr Dominick Chilcott, and the Church of Ireland Archbishop of Dublin, Michael Jackson

Father Gleeson, a priest of the Archdiocese of Dublin,was Chaplain to the Royal Munster Fusiliers as they faced battle on the Western Front. He was the priest depicted in the famous painting The Last General Absolution of the Munsters at Rue du Bois by Fortunino Matania, where he is seen mounted on a horse, giving absolution to the troops on the eve of the Battle of Aubers Ridge in May 1915. He kept meticulous handwritten diaries of his time with the Munsters. They contain vivid, emotional and very often tragic accounts of his time with the troops near the battlefield. He was often the only person in a position to communicate with the families of soldiers missing or killed in action.

The Fr Gleeson collection consists of diaries, brigade roll books, letters and miscellaneous notes.  These were transcribed by the Dublin Diocesan archivist, Noelle Dowling, and volunteer archivist, Peter Sobolewski. They began work in January 2014 and transcribed collection was given to UCD Digital Library for digitisation in November 2014. Click here to explore the Fr. Francis Gleeson Papers on UCD Digital Library.