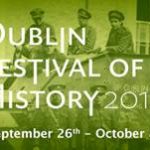 The Dublin Festival of History ran from 26 September to 8 October 2014. The festival, which is managed by Dublin Public Libraries, was first hosted in 2013, and consisted of a wide range of events: a series of lectures and discussions hosted in Dublin Castle Printworks; walking tours, public talks hosted in Dublin City Hall and across the Dublin Public Libraries’ network; and a number of associated film screenings and exhibitions. Given that 2014 marked the centenary of the outbreak of World War One, a number of the events took the war as a theme. In Dublin Castle on 27 September there was a recital of Irish war poetry hosted by Paul Rouse (UCD). Later that day there was a History Ireland Hedge School debate on ‘Women at war, 1914-18’, hosted by History Ireland editor Tommy Graham, and featuring John Borgonovo (UCC), Liz Gillis (OPW), Mary McAuliffe (UCD), and Fionnuala Walsh (TCD). Later that evening there was be a documentary theatre performance entitled ‘The Green Fields: The road to war’, and on Sunday 28 September John Horne (TCD) conducted a public interview with Hew Strachan (Oxford) on ‘Remembering the Great War’. Alongside these, a number of the lectures being hosted in DPL branch libraries took the First World War as a theme: topics included the outbreak of the war, the role of women in the war, and the history of the Royal Dublin Fusiliers.

Click here for further details and to learn more about the Dublin Festival of History.