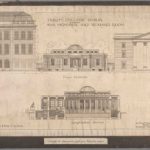 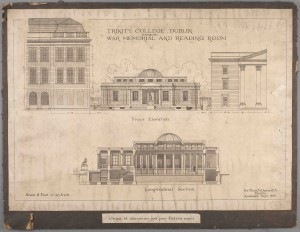 On Saturday 26 September a memorial stone was unveiled in Trinity College Dublin in honour of TCD students, staff and alumni who lost their lives in the First World War. The engraved stone was unveiled at the Hall of Honour, in TCD’s Parliament Square with staff, students and members of the public in attendance. Ambassadors representing some of the countries in which members of the Trinity community died were also present.

Approximately 3,000 TCD students, staff and alumni fought, and 471 died, in military service during the Great War. During the ceremony, profiles of some of these individuals were read by TCD’s Students’ Union president, Lynn Ruane and Graduate Students’ Union president, Katie Crowther. Those who died are remembered in Trinity’s Hall of Honour which acts as the entrance of the 1937 Reading Room in Front Square, originally opened in 1928 to a design by Sir Thomas Manly Deane, whose son had been killed at Gallipoli.  The new commemorative stone by sculptor Stephen Burke is made of Portland stone, and is located on the plinth in front of the building.

From Century Ireland: Tomás Irish on TCD and Gallipoli.

Speaking ahead of the unveiling ceremony, TCD Provost Dr Patrick Prendergast said that ‘we decided that one of the key Trinity events as part of the Decade of Commemorations would be to commission and install a memorial stone to publicly identify the Hall of Honour in Front Square. Today, sees the culmination of that work, marking once again the tremendous loss of life from within the Trinity community among those who fought and died in the World War One. Trinity’s war experience is part of the university’s history and the inauguration of the memorial stone will give further prominence to this past’.

Pro-Chancellor, Professor Dermot McAleese officially unveiled the memorial stone and the ceremony included addresses by the Provost and by Professor Ivana Bacik, Reid Professor of Law and member of Seanad Éireann.  The three then laid a wreath at the memorial stone. This was followed by a minute’s silence and a lament played on the Uilleann pipes.

Read the text of Ivana Bacik’s speech. Watch footage of the 1928 unveiling of the Hall of Honour, visit the TCD ‘Decade of Commemoration’ website, and explore the TCD exhibition The Great War revisited on Google Cultural Institute.