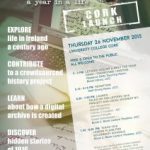 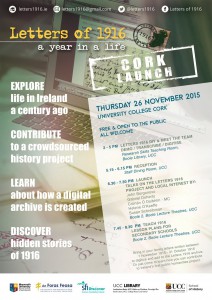 On Thursday 26 November the Cork launch of the Letters of 1916 project took place in University College Cork. The project was originally set up to create a crowd-sourced archive of personal letters and testimonies relating to the period before and after the Easter Rising, from 1 November 1915 to 31 October 1916. To date, it has collected over 2,200 letters in order to create an online open-access archive of the year around the Easter Rising. The project team hosted a demonstration of the project in the Boole Library from 2-5pm, followed by a reception. The launch, consisting of a number of presentations, took place at 6.30pm in the Boole Lecture Theatre.

Learn more about the Letters of 1916 project