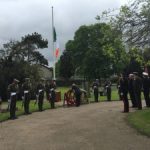 On Thursday 26 May a ceremony was at Grangegorman Military Cemetery in recognition of the more than 125 British soldiers killed during the Easter Rising of 1916, a third of whom were in fact Irish. The joint British-Irish ceremony included readings of historical accounts, music and prayer. Minister for Foreign Affairs Charlie Flanagan TD and outgoing British Ambassador Dominick Chilcott both laid wreaths at the ceremony on behalf of the Irish and British governments respectively. Members of the Defence Forces and the British Armed Forces also took part in the ceremony. A solemn wreath-laying took place, followed by a minute of silent reflection and a piper’s lament. The National Flag was then raised to full mast.

From Century Ireland: British forces in the Easter Rising.

Posted in 2016 events, Dublin, Easter Rising, Events in May 2016, Official Commemoration, Past