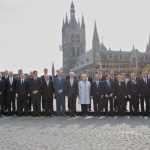 On 26 June 2014 Taoiseach Enda Kenny attended a special commemoration of the outbreak of the First World War in Ypres, Belgium. The event, which was attended by twenty-eight heads of government, was organised by the European Council, and preceded a working session of the council in Brussels the next day. A special ‘Last Post’ ceremony was held at the Menin Gate, which was followed by the unveiling nearby of a ‘peace bench’, designed with the assistance of the Commonwealth War Graves Commission (CWGC).

From Century Ireland: View the RTÉ report on the ceremony at Ypres.

From the EU Council TV Newsroom: View a range of footage from the event, along with archival footage of Ypres during the First World War.