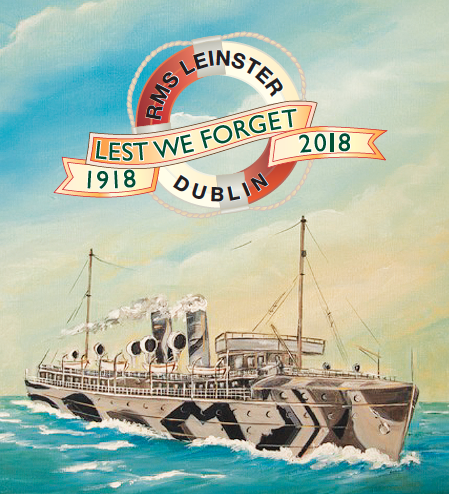 Between July and December 2018 the National Maritime Museum, Haigh Terrace, Dun Laoghaire, Co. Dublin,  will host the a new exhibition to mark the centenary of the sinking of the RMS Leinster on 10 October 1918. The Leinster was originally built for the City of Dublin Steam Packet Company to service its route across the Irish Sea, and had been pressed into service during the First World War. torpedoed by a U-Boat just outside Dublin Bay after leaving Kingstown (Dun Laoghaire) harbour, with the loss of over 580 lives. The military personnel killed were from a wide range of countries – Australia, Ireland, Britain, Canada, the United States and New Zealand – and many were later buried in Grangegorman Military Ceremony. Civilian dead were interred across the city in cemeteries such as Glasnevin. The sinking of the Leinster remains the single biggest maritime disaster ever recorded in the Irish Sea, and will be marked by a full commemorative programme in late 2018.

The exhibition was launched by Cllr. Ossian Smyth, Cathaoirleach of Dun Laoghaire-Rathdown County Council, on 26 July 2018. It will run until December 2018.

From History Ireland: The sinking of the RMS Leinster.