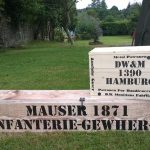 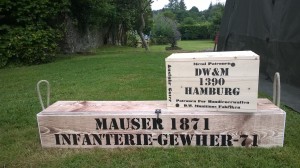 On Saturday 26 July an event took place at Glendalough House, Annamoe, Co. Wicklow, to mark the centenary of the Howth gun-running. Glendalough House was the home of Erskine Childers, whose yacht Asgard was used to transport the shipment of rifles landed in Howth harbour on 26 July 1914. The event, which was organised in association with NUI Maynooth and the Curragh Military Museum, involved a firing exercise to demonstrate how the weapons landed from the Asgard, which were Mauser rifles originally used by the Prussian Army, would have been used in street-fighting during the eventual 1916 Rising. This took place under the supervision of the Defence Forces. A number of rifles from the Larne and Howth gun-runnings, retained in the Curragh Military Museum, were on display.

The event was also addressed by Dr. David Murphy of NUI Maynooth and Mr James Black of James Black Restorations, who explained the context to the Howth and Larne gun-runnings respectively. Also on display was a Rolls Royce Silver Ghost that had been used by the IRA between 1921 and 1924 – the so-called ‘Moon Car’ – which had been restored by Mr Black, and which was recently on loan to the Curragh Military Museum.

Learn more about the ‘Moon Car’, from James Black Restorations.

Learn more about the Curragh Museum.

Learn more about the history of Glendalough House. 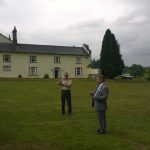 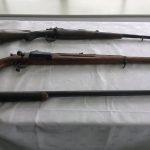 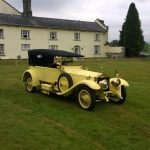