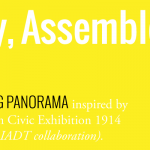 From January 26 to February 8 2015 the City Assembly House, South William St, Dublin 2, will host City, assembled: a moving panorama inspired by the Dublin Civic Exhibition, 1914. This is a collaboration between UCD and IADT. The original Civic Exhibition was held in the grounds of Kings Inns and the adjoining Linen Hall between 15 July and 31 August 1914. Largely inspired by the work of the Scottish town planner Patrick Geddes, the Civic Exhibition was concieved as a practical spur towards urban renewal in Dublin; an issue given a greater urgency by the Church Street disaster and the exposure of horrific slum conditions in the course of the 1913 Lockout. While overshadowed by the outbreak of the First World War, the exhibition had incorporated a competition to devise a new town plan for Dublin; this was won by Patrick Abercrombie, Arthur Kelly and Sydney Kelly, and was published in 1922 under the title Dublin of the future.

City, assembled provides a broad view of Dublin City under the themes of ‘what it was’, ‘what it is’, and ‘what it could be’. It gives the viewer the chance to step back from their immediate surroundings in order to realise and re-imagine the potential for change. Click here for full details.

Download Abercrombie, Kelly and Kelly’s Dublin of the future (1922).