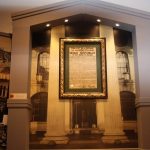 On Thursday 26 February 2015 An Taoiseach, Enda Kenny TD, has today (Thurs, Feb 26) officially opened Ireland’s first exhibition to mark the imminent 1916 centenary, entitled Birth of a nation: the evolution of Irish Nationhood, 1641-1916, at Louth County Museum, Dundalk, Co Louth. Speaking at the launch, Mr Kenny observed that ‘this exhibition, the first in our country to celebrate the 1916 centenary, allows us to find out more about the birth of our nation via the words, thoughts and possessions of those who were there. Included here are names which are already firmly etched in our history books but also those who we are just beginning to find out about thanks to their families, friends and all those who have contributed artefacts to the County Museum here in Dundalk. This  thought-provoking and moving exhibition provides the ultimate inspiration for projects taking place throughout Ireland as we approach the 1916 centenary’.

Mr Kenny was joined on his visit to the by Heather Humphreys TD, Minister for Arts, Heritage & the Gaeltacht and Senator Jim D’Arcy who is a member of the All-party consultation group on commemorations. The Taoiseach and Minister Humphreys were welcomed to the museum by Cllr Oliver Tully, Cathaoirleach, Louth County Council; Joan Martin, Chief Executive, Louth County Council and Brian Walsh, curator of the exhibition.  Many of those who contributed items were also in attendance, including relatives and friends of those involved in 1916 and the momentous events in the lead up to the Easter Rising.  The exhibition was planned over over the past two years with the aim of creating an exhibition which will evolve over 2015 and through 2016.

Artefacts on display include an original 1916 Proclamation, and documents belonging to Patrick Pearse, W.B. Yeats and Roger Casement. Weaponry used over the centuries as well as uniforms, medals and other memorabilia are included along with – perhaps most poignantly – letters sent from prison after the Easter Rising to the mothers of some of those being detained.  Brian Walsh, who curated the exhibition, said ‘I have been able to work on and with some of the most significant artefacts in our history – items associated with many of the pivotal points in the national narrative. I must confess that when in the presence of these items, and the ensuing discussions that accompanied them, I, and my colleagues, were very aware of the hand of history’.

Birth of a Nation: the evolution of Irish nationhood, 1641-1916 is now open at Louth County Museum, Dundalk. For further information contact info@dundalkmuseum.ie/042- 9392999.