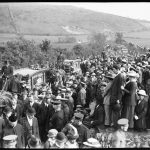 Image courtesy of the National Library of Ireland

On 26 April 2015 the Cobh Credit Union Lusitania Centenary Photographic Collection went in display in Cobh, Co. Cork. The exhibition comprises of over sixty images, mostly taken in Cobh in the aftermath of the Lusitania disaster. The A.H. Poole Lusitania collection was digitised from glass plates held in the National Library of Ireland, and has never been displayed collectively. The exhibition records, in exceptional detail, survivors on the streets of Queenstown, the mass funeral of 145 victims in the Old Church Cemetery. The images are being displayed in the Cunard Centre in Cobh; this was the Cunard Line Ticket Office in 1915, and a portion of the building was used as a temporary morgue where some of the recovered bodies were laid out.

Colman Rasmussen, chairman of Cobh Credit Union, explained that they were delighted to support the Cobh Lusitania Centenary Committee in staging this signature exhibition: ‘On seeing the photographs we immediately realised the story that they tell. The sinking of the Lusitania was a terrible tragedy with a local, national and an international dimension. It seemed appropriate that as the largest community based business organisation in Cobh that we would provide funding to allow them to be showcased right here in the town in which they were taken’.

The Cobh Credit Union Lusitania Centenary Photographic Exhibition is open from 11am to 6 pm from Tuesday to Saturday and from 1pm to 6 pm on Sundays from now until the end of May. Admission is free.

Cobh is one of

four coastal communities in Co. Cork that commemorated the Lusitania centenary with a number of events, entitled Lusitania100 Cork, in association with Cork County Council.

Post Views: 184
Posted in 2015 events, Artistic and Cultural, Events in April 2015, Events in May 2015, Exhibitions, Local Authority Events, Munster, Past, World War One