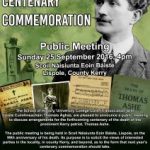 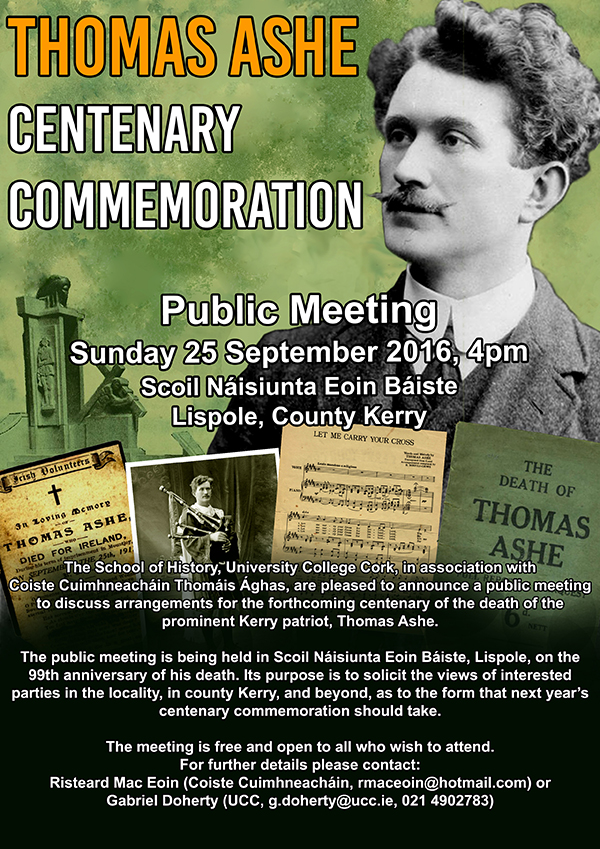 On Sunday 25 September the School of History, University College Cork, in association with Coiste Cuimhneacháin Thomáis Ághas, organised a public meeting to discuss arrangements for the forthcoming centenary of the death of theThomas Ashe, to be held in his native village of Lispole, Co. Kerry, at 4pm on the afternoon of Sunday 25 September. A teacher by profession, Ashe was a prominent activist in most of the major nationalist organisations of the pre-independence period, including the Gaelic League, the Gaelic Athletic Association, the Irish Republican Brotherhood, and the Irish Volunteers. Ashe was responsible for leading the Irish Volunteers at the battle of Ashbourne in Co. Meath, the most significant military engagement outside Dublin during the Easter Rising. Held in high regards by his peers, he was imprisoned after the Rising but was released, and became a key figure in the reorganisation of separatist republicanism in 1917. Imprisoned for making a seditious speech, in August 1917 he and a number of other republican prisoners went on hunger strike in Mountjoy gaol, and died on 25 September 1917 as a result of force-feeding him by the prison authorities. His subsequent funeral and burial in Glasnevin cemetery, Dublin, was characterised by the largest show of strength by the republican movement since the Rising, and was a major milestone in the campaign for independence.

The public meeting was held in Scoil Náisiunta Eoin Báiste, Lispole, on the 99th anniversary of his death, and its purpose is to solicit the views of interested parties in the locality, in Kerry and beyond as to the form that next year’s centenary commemoration might take. For further details please contact Risteard Mac Eoin (Coiste Cuimhneacháin, rmaceoin@hotmail.com) or Gabriel Doherty (UCC, g.doherty@ucc.ie, 021 4902783).