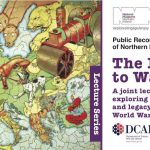 On 25 September 2014 Catriona Pennell (Exeter) gave a lecture in the Ulster Museum, Belfast, as part of the joint lecture series being organised by National Museums Northern Ireland and the Public Record Office of Northern Ireland (PRONI), entitled ‘The road to war’. Dr. Pennell’s lecture was entitled ‘Ireland’s entry into war, 1914: Acceptance or refusal?’.