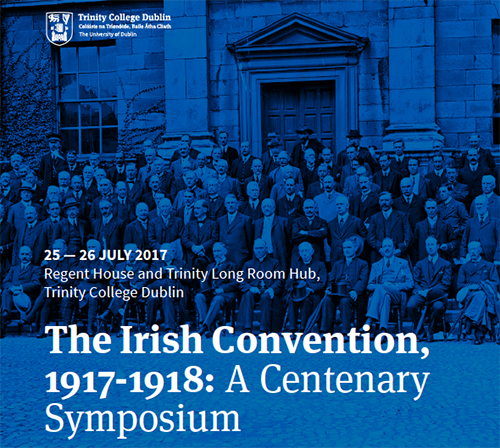 On Tuesday 25 and Wednesday 26 July 2017, Trinity College Dublin hosted ‘The Irish Convention, 1917-1918: A centenary symposium’. In the wake of the Easter Rising, and after other failed attempts to find a compromise, Prime Minister Lloyd George summoned a gathering of representative Irishmen to a convention to establish a basis for a settlement of the ‘Irish question’. The ‘Irish Convention’ was held in Trinity College Dublin, and this centenary symposium examined what the convention hoped to achieve, and will consider the political thinking of those who took part and also of those who did not at that key time in 1917-18.  The symposium also addressed the convention’s legacy, particularly in light of how all-party talks have shaped the recent history of this island.