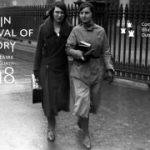 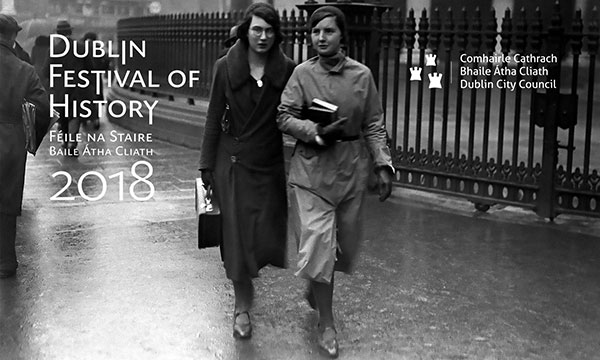 The sixth Dublin Festival of History takes place from 24 September to 7 October. Presented by Dublin City Council and organised by Dublin City Public Libraries, this very ambitious festival has grown in popularity over the years, with a wide range of events – talks, walks, exhibitions, performances – taking place across Dublin’s public library network (and a range of other venues) for nearly a fortnight, culminating in a major ‘finale weekend’ in Dublin Castle. The events being marked as part of the ‘Decade of Centenaries’ have always loomed large within the festival programme, and 2018 is no different, with a major emphasis on the events of 1918. So here is a short guide to what to expect in terms of learning about political, social and cultural life in Ireland 100 years ago. All events are free, though booking may be required for some of them.

The festival officially begins on Monday 24 September, with talks on the sinking of the RMS Leinster, suffragettes, Dublin in 1918 and Lá na mBan. Tuesday 25 September sees a walking tour of ‘Suffragette’s Green’ and a conference on suffrage and national independence in Ireland and Poland, while on Wednesday 26 September Dublin at the end of the Great War is up for discussion, and the Mansion House will be hosting a ‘Decade of Commemoration’ quiz night, to be hosted by Joe Duffy. The sinking of the RMS Leinster is discussed again on Thursday 27 September, while Friday 28 September sees events on both James Connolly and Roger Casement taking place.

The weekend of 29-30 September sees the festival overlap with the Fingal Festival of History in Swords, while Dublin City Library and Archive will be hosting a seminar on ‘The sports of war’, exploring the impact of the First World War on sport in Ireland. 29 September will see a talk on Cathal Brugha, and the . ‘Suffragette’s Green’ walking tour will run again that day. Another walking tour on ‘Suffrage in the suburbs’ will go ahead on Sunday 30 September and Monday 1 October.

The first day of October also sees a lecture on Dublin soldiers in the Great War and a discussion of Liam Mellows. The First World War is prominent on Tuesday 2 October, with the Armistice of 1918 being discussed in the National Library and a ‘reconstructional bake’ of World War One army biscuits in Richmond Barracks.  Wednesday 3 October will see a discussion and recital of poetry from the First World War, and the National Library’s new exhibition ‘From ballots to bullets’ will be showcased in the National Photographic Archives with a series of pop-up talks and tours. There will be a walking tour of the Liberties during the Civil War, and the recently released Irish Independence Film Collection will be discussed in the Irish Film Institute.

Thursday 4 Oct sees a walking tour of the ‘Voices of Memory’ installation at the National War Memorial Gardens in Islandbridge, along with talks on the RMS Leinster, Michael Collins, Madeleine ffrench-Mullen, Gaelic Sunday and, last but not least, an exploration of why 1918 is so significant.

The final weekend of the festival sees events taking place in Dublin City Hall and Dublin Castle, as well as in the branch libraries. There will be a talk on Éamon de Valera, a History Ireland Hedge School on a century of women’s activism on 5 October, a talk on ‘Dublin’s Great Wars’ and a pop-up ‘suffrage choir’ on 6 October, and on 7 October a screening with discussion of Keepers of the flame, a new documentary based on the holdings of the Military Service (1916-23) Pensions Collection, a discussion on the acclaimed Atlas of the Irish revolution.

Walking tours of Dublin after the Rising will take place on Saturday 6 and Sunday 7 October, and there will also be a pop-up library in Dublin Castle over the weekend. And Dublin City Library and Archives’ two current centenary exhibitions, ‘”Doing their bit”: Irish women and the First World War’ and ‘Suffragist City’, will be on display throughout the festival in Dublin City Hall and Richmond Barracks respectively.

The full programme for the Dublin Festival of History can be picked up from libraries across the city, or can be downloaded directly here.