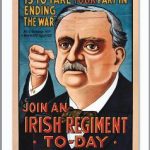 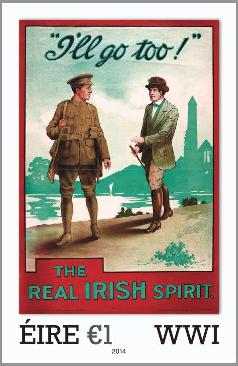 On 24 July An Post released the latest in a series of commemorative stamps marking the ‘Decade of Centenaries’. The two stamps mark the outbreak of the World War One, and feature recruitment posters issued by the Central Council for the Organisation of Recruiting in Ireland to encourage Irish men to join the British war effort in Europe. The images were provided by the National Library of Ireland. The stamps were designed by renowned Irish designer, Ms Ger Garland. 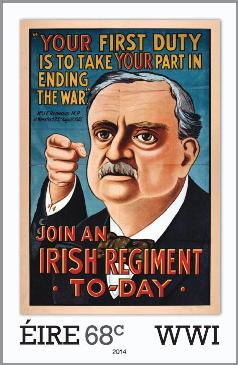 The 68c and €1.00 stamps, together with a limited edition ‘First Day’ cover envelope, may be viewed and purchased at www.irishstamps.ie; at Dublin’s GPO and all main post offices;  and may also be ordered by phone: (01) 705 7400.