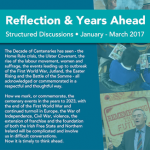 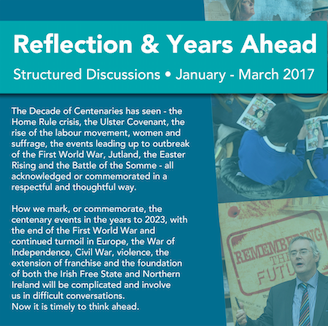 On Friday 24 February 2017 the Community Relations Council (NI) hosted the second of three ‘Decade of Centenaries’ discussions. In recent years the Home Rule crisis, the Ulster Covenant, the rise of the labour movement, women and suffrage, the events leading up to outbreak of the First World War, Jutland, the Easter Rising and the Battle of the Somme have all been acknowledged or commemorated in a respectful and thoughtful way.

These discussions are intended to explore how to mark, or commemorate the centenary events in the years to 2023, with the end of the First World War and continued turmoil in Europe, the War of Independence, Civil War, violence, the extension of franchise and the foundation of both the Irish Free State and Northern Ireland. The second discussion, on ‘district council & museum services, took place from 9am-1pm at PRONI, 2 Titanic Boulevard, Belfast, BT3 9HQ.