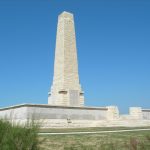 On Friday 24 April 2015  a Commonwealth and Ireland commemoration service for the Gallipoli campaign took place at the Commonwealth War Graves Commission’s Cape Helles Memorial, Gallipoli, Turkey. The British-led campaign against the Ottoman Empire in the Dardanelles during the First World War lasted from February 1915 to January 1916; over 21,000 British and Irish troops were killed in the campaign, with another 52,000 wounded. 25 April, the date of the actual troop landings, was eventually designated ‘ANZAC Day’, and was marked in Australia, the UK, and various theatres of war even before the war was over. By the 1920s it had been officially established as a day of commemoration in Australia and New Zealand, complete with specific rituals such as the dawn vigil (originally associated with the Australian contingents). It has been marked in Ireland since 2006.

President Michael D. Higgins and Charles Flanagan TD, Minister for Foreign Affair, attended the service, along with representatives of the Defence Forces, including Chief-of-Staff Lt.-Gen. Conor O’Boyle. President Higgins will also attend the Australin memorial service at Lone Pine and the New Zealand memorial service at Chunk Bair, both on the Gallipoli peninsula. President Higgins’ laid a wreath on behalf of the Irish people.

The Royal Munster and Royal Dublin Fusiliers participated in the original landings, and in August 1915 the 10th (Irish) Division landed at Suvla Bay. The harsh conditions took a heavy toll, as the 10th Division suffered 9,000 casualties – death, wounded, diseased, missing – over the next two months. Perhaps 2,700 Irish troops in the ranks of the 10th Division were killed in the Gallipoli campaign, which had a surprisingly powerful resonance in Ireland; the Irish losses at Gallipoli were, as a proportion of total wartime losses, comparable to those of their Australian counterparts.

Post Views: 56
Posted in 2015 events, Events in April 2015, Ireland and the World, Past, UK/United Kingdom Centenaries, World War One