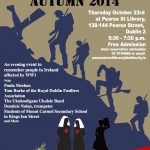 On Thursday, 23rd October Pearse Street Public Library hosted an evening of remembrance in memory of Irish people affected by the First World War. The event was compered by Gary Kilgallen, former chair of the Irish Anti-Apartheid Movement.

The poet Paula Meehan read a selection of poems reflecting the theme of the evening. Tom Burke of the Royal Dublin Fusiliers Association told the story of an individual soldier, Private Christopher Roger from Bishop’s Street, and the impact of the war on him and his family. Music was provided by the trumpeter Dominic Nolan, who performed ‘The Last Post’ and ‘Reveille’. The Ukuhooligans Ukulele Band and the Ringsend Singers also performed music and songs from the period. Four students from Mount Carmel Secondary School gave readings that reflect their perceptions of war.

From History Ireland: Padraig Yeates on Dublin during the First World War.