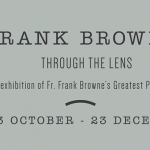 On 23 October 2014 a new exhibition opened at Farmleigh, entitled Frank Browne: through the lens. This is an exhibition of a wide selection of photographs taken by the Cork-born Jesuit Frank Browne (1880-1960). The exhibition ran until 23 December.

Browne took his first photographs during a European tour in 1897, just before joining the Jesuits, and achieved international fame due to his photographs of the Titanic in 1912, including the last known image of the ship as it left Queenstown (now Cobh) in Co. He also served as a chaplain to the Irish Guards during the First World War, and took a series of photographs of life on the Western Front.

During his lifetime Browne made 41,500 negatives. He died in 1960 and his work was largely forgotten. In 1985 Fr. EE O’Donnell SJ. came upon the trunk containing the negatives and quickly recognised that the pictures were exceptional but in many cases were deteriorating. This necessitated urgent action to conserve, duplicate and catalogue the entire collection. Edwin and David Davison of Davison and Associates carried out this work and now market the collection worldwide.  All of these images have been re-mastered to print at a quality not possible twenty-five years ago and formed the basis of the exhibition, which consisted of approximately 200 photographs curated by Jurga Rakauskaite, were on show at the OPW Farmleigh Gallery. They are also published in Frank Browne: a life through the lens.

View a selection of Frank Browne’s World War One photographs.