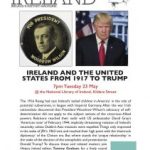 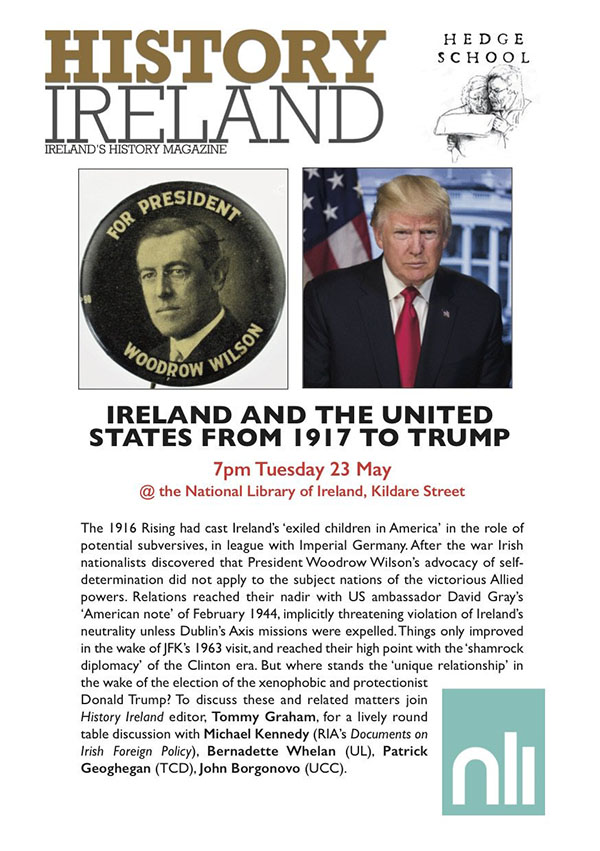 On Tuesday 23 May the National Library of Ireland hosted a History Ireland ‘Hedge School’ debate entitled ‘Ireland and the US from 1917 to Trump’. The 1916 Rising had cast Ireland’s ‘exiled children in America’ in the role of potential subversives, in league with Imperial Germany. After the war Irish nationalists discovered that President Woodrow Wilson’s advocacy of self-determination did not apply to the subject nations of the victorious Allied powers. Relations reached their nadir with US ambassador David Gray’s ‘American note’ of February 1944, implicitly threatening violation of Ireland’s neutrality unless Dublin’s Axis missions were expelled. Things only improved in the wake of John F Kennedy’s 1963 visit, and reached their high point with the ‘shamrock diplomacy’ of the Clinton era. But where stands the ‘unique relationship’ in the wake of the election of Donald Trump? The debate was chaired by History Ireland editor Tommy Graham, and the panellists were Michael Kennedy (RIA’s Documents on Irish Foreign Policy), Bernadette Whelan (UL), Patrick Geoghegan (TCD) and John Borgonovo (UCC). Stream or download the full debate here.

Posted in 2017 events, Dublin, Events in May 2017, History Ireland Podcasts, Ireland and the World, National Library, Past, World War One