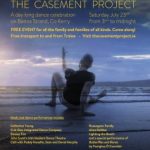 On Saturday 23 July 2016 The Casement Project presented Féile Fáilte, a day-long free festival on Banna Strand, Co. Kerry. Running from mid-afternoon to midnight on Saturday July 23, Féile Fáilte featured dance performances, an evening céilí, a night-time beach disco and a spectacle of light. In 1916, Roger Casement, Irish rebel, British knight and international humanitarian, came ashore on Banna Strand and was captured nearby. Responding to the centenary commemorations of the 1916 Easter Rising in Ireland, and to its context in the First World War, choreographer Fearghus Ó Conchúir mobilised the neglected legacies of the past as a resource for the future. Championing the value of dance as form of knowledge that can help imagine and embody better possibilities of living, this choreography of bodies and ideas takes place across multiple platforms and national boundaries. Féile Fáilte was a major free and public element to the project.