On 23 August 2014 Heather Humphreys TD, Minister for Arts, Heritage and the Gaeltacht, marked the 100th anniversary of the first award of a Victoria Cross to an Irish man serving in the British Army during the First World War at a commemorative event in Glasnevin Cemetery. The Victoria Cross is the highest military honour for valour that can be awarded to the British armed forces. The memorial stone was presented to Minster Humphreys by Lord Ahmad of Wimbledon, parliamentary under-secretary of state for communities and local government.

The first Victoria Cross commemorative paving stones are being laid in Britain, and presented in Ireland, on 23 August 2014. The first memorial stone in Ireland is being issued in memory of Lt Maurice Dease, born 28 September 1889, of Coole, Co. Westmeath, who was awarded the first VC of the First World War for his actions on the morning of Sunday 23 August 1914 in the line north of Mons, guarding the railway bridge over the canal at Nimy. Under German attack, Dease had positioned two machine-guns at the end of the bridge, which soon attracted heavy German fire.  Every member of the guns’ crews was either killed or wounded in the morning’s action. Despite the risk to himself, he left cover on several occasions to clear his guns for action and direct their fire. Although wounded twice, he remained on the bridge until he eventually suffered a third, and mortal, wound. He is buried in Saint-Symphorien military cemetery, Mons, Belgium.  His VC is in the Royal Fusiliers Museum in the Tower of London.

Accepting the memorial stone from Lord Ahmad, Minister Humphreys said that ‘these stones will bring to mind the experience of a small number of individual soldiers of the First World War who were distinguished by their courage and actions. I believe that learning of their service and background will give modern generations an insight into the nature of the war. I hope that these stones will remind us not only of the bravery of the soldiers but of the tragedy of that terrible war’.

A total of 35 memorial stones will be provided by the British to be incorporated in a monument in Ireland. The first Victoria Cross memorial stones are also being laid in Britain today.

Learn more about Maurice Dease from IWM Lives of the First World War.

From Century Ireland: Irish soldiers involved in fighting at Mons. 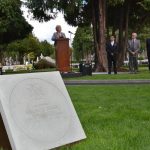 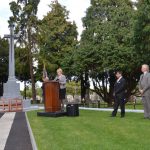 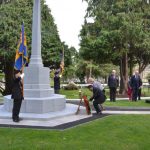 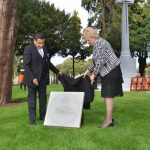 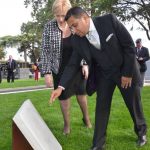 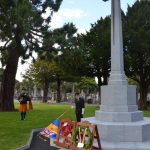 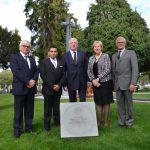 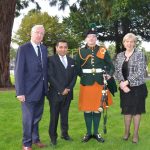 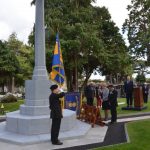 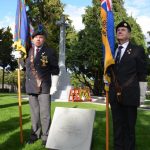