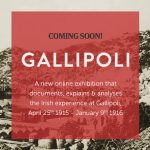 On 23 April 2015 Heather Humphreys TD, Minister for Arts, Heritage and the Gaeltacht, launched a new online exhibition developed by Century Ireland on the Gallipoli campaign (25 April 1915-9 January 2016) in the National Library of Ireland, Kildare St, Dublin 2, at 6pm.

The ‘Irish in Gallipoli’ website has been produced by Boston College, is a partnership with RTE and the Irish national cultural institutions and has been funded by the Department of the Arts, Heritage and the Gaeltacht.

The Gallipoli campaign is estimated to have cost over 130,000 lives on all sides, including 4,000 Irishmen fighting in Irish regiments, as well as in other British regiments and those from the various empire nations. While well remembered in the national stories of Australia, New Zealand and Turkey especially, the Irish role in the Gallipoli campaign was rarely recalled.

In 1915, with so many Irishmen, both regular soldiers and later volunteers, fighting in Gallipoli, the news of battles on the peninsula and letters from the front were eagerly devoured across the four provinces of Ireland. After the high casualty rate – perhaps as many as 2,000 Irish casualties in a month – of the August offensive, which touched many Irish families, the poet Katherine Tynan wrote, ‘for the first time came bitterness, for we felt that their lives had been thrown away and their heroism had gone unrecognized…Dublin was full of mourning’.

Gallipoli, and the Irish losses there had a powerful effect on Irish attitudes to the War and, after the tumultuous events of Easter 1916 and the years following, the Irish national narrative was one that forgot the Irish who had died in Gallipoli or, as Canon Charles O’Neill summed up when he penned The Foggy Dew, ‘twas better to die neath an Irish sky than at Sulva or Sud-El-Bar’.

The aim of this website is to explore the Irish experience of Gallipoli: what happened there and what are the stories of those who served and in many cases died?

The site features a series of guides explaining the background to the campaign and the Irish involvement;  daily news tracker detailing events on the peninsula as they happened; daily eyewitness accounts from eight Irish people who took part in the campaign; daily reports from the regimental diaries of the four Irish regiments that fought; a daily death notice of an Irishman who died at Gallipoli; a series of films, radio broadcasts and podcasts which focus on different aspects of the campaign;  series of galleries containing over 500 images from Gallipoli in 1915; and education packs for use across the various age groups in schools.

The Irish in Gallipoli website is part of Boston College’s broader engagement with the ‘Decade of Centenaries’, namely Century Ireland: www.rte.ie/centuryireland. That site went live in May 2013 and will run until the end of 2023. Century Ireland is a realtime historic newspaper that explores the day to day events of life in Ireland 100 years ago. It is supported by a daily feed on twitter #CenturyIRL and on facebook: CenturyIreland

The launch was followed at 7pm by a lecture by Prof. Stuart Ward (Copenhagen) entitled ‘”Johnnies and Mehmets…side by side”: the redemptive afterlife of Gallipoli in Australia, Turkey and Ireland’. The lecture will examine the afterlife of the Gallipoli campaign. While a century ago the battle for the Gallipoli peninsula signalled bitter conflict and bloody mayhem, today the enduring message drawn from the campaign is one of shared sacrifice and reconciliation. For the two nations with the most intimate associations with Gallipoli, Turkey and Australia, custodianship of the site and commemoration of the campaign is steeped in redemptive, pacifist politics. This emerged in the immediate aftermath of the Great War itself; Mustafa Kemal Atatürk’s celebrated 1934 aphorism of ‘Johnnies and Mehmets … side by side’ (now memorialised in sandstone at the Australian landing site) was the most definitive expression of this penchant for making peace from war. Then, as now, the outward forging of a conciliatory bond between former antagonists also worked to submerge internal divisions within those societies. This is reflected by recent moves in the Republic of Ireland to embrace its long-forgotten role in the Gallipoli campaign as an emblem of shared national endeavour across sectarian lines. The lecture will explore the the national and transnational dynamics of the redemptive afterlife of Gallipoli among these three former combatants.