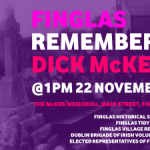 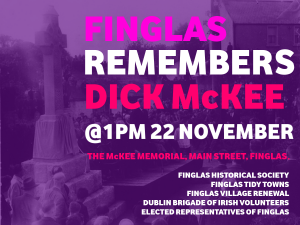 On Sunday 22 November 2015  a cross community event took place in Finglas village, Dublin 11, to commemorate Brigadier Dick McKee (1893-1920). McKee was a native of Finglas, and had fought in both the 1916 Rising and the War of Independence; a senior member of the IRA’s Dublin Brigade, he was killed while in British captivity on ‘Bloody Sunday’, 21 November 1920. McKee Barracks on Blackhorse Avenue (formerly Marlborough Barracks) is named after him. A memorial to his honour was erected in Finglas village in 1951; one also exists on Barnardos Sq beside Dublin City Hall.

The community commemoration took place at 1pm on Sunday 22 November 2015 at the McKee Memorial. The event included music, ceremony and the laying of wreaths by elected representative and community groups. This was followed by a reception and an exhibition of documents associated with the erection of the monument in 1951. The event was supported by the Finglas Tidy Towns, the Finglas Historical Society, and Finglas Village Renewal.