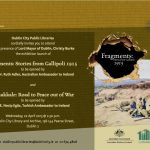 On Wednesday 22 April two exhibitions went on display in the Dublin Room at Dublin City Library and Archive, entitled Fragments: Stories from Gallipoli 1915 and Çanakkale: Road to Peace out of War.

Fragments: Stories from Gallipoli 1915 was curated by Dublin City Archives and drew mainly on sources from the Royal Dublin Fusiliers Association Archive which is held at Dublin City Library and Archive. It gave an overview of the failed 1915 campaign by the Allies and used diaries, photographs and correspondence to highlight the personal experiences of a number of Irish –born soldiers who fought in Gallipoli.

The Gallipoli campaign is known as “Çanakkale Savaşı” (the battle of Çanakkale) in Turkey. The photographic exhibition Çanakkale: Road to Peace out of War was funded by the Turkish Embassy in Ireland, and reflected not only the military aspects of the battle of Çanakkale, but also the humane relationship between the soldiers on both warring fronts. Both exhibitions remained on display at Dublin City Library and Archive, 138-144 Pearse Street, Dublin 2, until 29 May.

Posted in 2015 events, Archives, Artistic and Cultural, Dublin, Events in April 2015, Exhibitions, Ireland and the World, Past