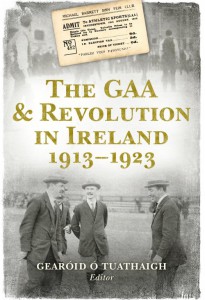 On Wednesday 21 October Croke Park and The Collins Press hosted the launch of The GAA and Revolution in Ireland, 1913-1923, edited by Gearóid Ó Tuathaigh (NUIG). The book explores how the GAA, as a major sporting and national body, both influenced and was influenced by the upheaval that marked the decade between the labour conflict (the ‘Lockout’) of 1913 and the end of the Civil War in 1923 was one of seismic upheaval. Gearóid Ó Tuathaigh, Emeritus Professor in History at NUI Galway and editor of the volume, said prior to the launch that ‘the dramatic impact of the main events of this decade on ‘ordinary’ life is examined from an engrossing perspective through the lens of a sporting organisation’. The accessibly written essays, attractively blended with many previously unseen photographs, offer illuminating and challenging takes on the revolutionary decade, from the experiences of GAA members fighting in the First World War to the very particular problems posed to the GAA (both in Ulster and generally) by the move towards partition. Contributors include Gearóid Ó Tuathaigh, Paul Rouse, Páraic Duffy, Cormac Moore, James McConnel, Ross O’Carroll, Dónal McAnallen, Richard McElligott, Mike Cronin, Mark Reynolds, Eoghan Corry, Paul Darby, Seán Moran, and Diarmaid Ferriter

The GAA & Revolution in Ireland 1913–1923 was launched in Croke Park by GAA President Aogán Ó Fearghail.

From Century Ireland: The GAA or the Great War?