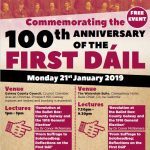 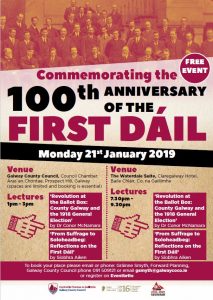 On Monday 21 January 2019 Galway County Council presented two lectures, to be delivered twice in two separate venues, to mark the centenary of the first Dáil. The first lecture, entitled ‘Revolution at the ballot box: County Galway and the 1918 general election’ was delivered by Conor McNamara, and the second lecture, entitled ‘From suffrage to Soloheadbeg’ was delivered by Síobhra Aiken.

The lectures were delivered twice: in Galway County Council offices, Áras an Chontae, Prospect Hill, Galway, at 1pm, and in Claregalway Hotel, Claregalway, at 7.30pm.

Admission was free to both events.